​It hardly seems possible; a visit of the world beating piano trio playing in Whitstable but it happened.  It was the last concert of their international tour; and what a concert.  Any previous concert by piano trios could easily be put aside.  The music had obviously been chosen to allow the musicians to get the best of expressions by all three instruments.  Doing it they each had the thought of the others, the violin in particular was given space by both the cello and piano and the result something quite exceptional.

The music too was chosen to all the three musicians to play at their best.  The concert opened with the Trio, andante con moto by Grieg.  He only wrote the slow movement.  It was a good introduction.  It was followed by Dvorak's Piano Trio Op. 90 (Dumky) with its various 6 movements.  The concert ended with the well known Schubert's D898.  The audience response was also something exceptional.  They were on their feet after every work and in the end the applause went on and on.  In response we got an encore, a movement from Beethoven's Archduke Trio.

​What an end that was bringing again exceptional applause.  Nothing like had ever been heard before.  It will be heard again.  Another has been booked in eighteen months time.T
John Wilkinson,
Whitstable Music Society
​April 2018

In this penultimate concert of the season, the Lisa Bucknell Trio performed works written for a less traditional ensemble formation: viola-clarinet-piano, and what a treat it was!

The three Australian musicians displayed their personal and musical connections from the moment they walked on stage and throughout their performance. The friendly dynamic between the players was evident especially in Mozart’s ‘Kegelstatt’ Trio, K. 498.

The programme was well balanced, with works by Schumman, Bruch, Mozart and a contemporary piece written by Huw Watkins in 2011 named ‘Speak Seven Seas’, in which the trio expressed its meaning effortlessly, considering its technical and textural difficulties.

Sharing similar ranges and timbres, the colours in the viola and clarinet complimented each other effectively, especially in the solo passages from the selection of Bruch’s Eight Pieces, Op. 83.

The rare opportunity to hear this trio was a musically enlightening occasion, made into an even more pleasurable experience as they entertained an appreciative audience.
Ana Vandepeer, BMus (Hons)
March 2018 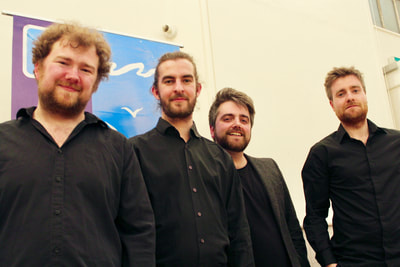 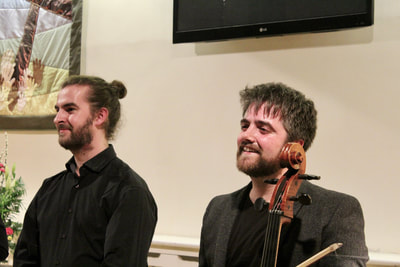 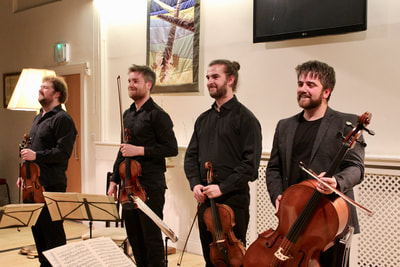 There was a particular sense of expectation about this month’s concert, as the Maxwell Quartet had originally been due to perform in January but had to postpone their Whitstable appearance due to the insertion of an extra international engagement in the Netherlands.

They were certainly worth waiting for: this proved to be an evening of chamber music at its very best, with string quartet playing of the highest order.  The artists had all been close friends since childhood, making music together as they grew up together in Scotland, and this seemed to give them a special degree of rapport with each other.  Not only was there was a homogeneity of age but also to some extent of appearance;  all four were on the hirsute side, sporting four beards and a ponytail between them!  Even their all-black dress code was given a quirky twist by the violist Elliott Perks who sported some brightly patterned socks that put one in mind of sailing boats. Meanwhile, much entertainment was to be had watching the expressive face and mobile eyebrows of 2nd violinist George Smith, and following the hyper-lively body language of cellist Duncan Strachan, whose balletic movement whilst seated not infrequently included lifting both feet off the ground at once!

The Maxwell Quartet’s  programme included works from the late 18th century, latish 19th century and early 20th century, with a contrasting first half of Haydn (Op 76 no.2) and Ravel (Quartet in F major), followed after the interval by Tchaikovsky’s 1st Quartet.  The performers brought out the full humour and quirkiness of the Haydn, imbuing it with both delicacy and sparkle, but the effortlessness of their ensemble was on best show in the Ravel, which unfolded with a wonderful degree of fluency and a sensuous, easygoing lyricism.  Ravel’ s Quartet occupies a distinctive soundworld, making use (inter alia) of the octatonic scale, and this performance transported us into some truly magical realms.

The quartet’s rendition of the Tchaikovsky, though also most enjoyable, perhaps fell a touch short of the extremely high bar they had set themselves with the pre-interval repertoire.  While the outer movements were convincingly rendered, the famous Andante cantabile really needed to sing more, and could have done with a stronger melodic line from 1st violinist Colin Scobie; for my money, the movement didn’t feel quite relaxed enough.   The Scherzo & Trio were suitably vigorous with the sense of dance well captured, but would have perhaps benefited from greater dynamic light and shade.

We were treated to a delightful encore in the shape of some Scottish and Irish folk music (the violinists swapping positions with each other at this point).  This was a brilliant way of rounding off the evening and sending the audience home with a spring in their step.

All told, it was a privilege to experience such a superb evening’s music-making, and the Maxwell Quartet’s evident enjoyment of their repertoire, and of each other’s company, proved infectious in the best possible sense!  We wish this young quartet well as they continue to conquer the heights of the chamber music world.
Stuart Whatton
Artistic Director, Music on the Green
​February 2018

Playing to a full audience at the Methodist Church in Whitstable, Bartholomew LaFollette (cello) and Caroline Palmer (piano) galvanised listeners both (very) young and old. In the evening’s well-balanced programme, ranging from lyrical and meditative to energetic and furious, they offered pieces as diverse as Stravinsky’s Suite italienne (compiled and transcribed by the composer in collaboration with Gregor Piatigorsky from his own ballet Pulcinella), Bach’s Cello Suite No. 3 (BMW 1009), Brahms’s Four Serious Songs, op. 121 and Grieg’s Sonata for Cello and Piano, op. 36.

LaFollete in particular maintained his sensitive virtuosity throughout the demanding programme, which enabled him to create a sense of consistency that spanned even strongly contrasting pieces.

Almost exactly two hundred years separate Suite italienne (1925; based on a work that was at first – and falsely – attributed to the Italian composer Giovanni Battista Pergolesi) and Bach’s cello suite (one of six, composed presumably between 1717–23) which were presented in the first half of the concert. Both pieces may share musical features associated with the baroque period. But the neo-classical and neo-baroque style of Stravinsky’s suite with its baroque themes and classical textures, yet often innovatively voiced chords, progressive harmonies and rhythms differs significantly from the simple motoric rhythms, often monophonic texture and less chromatic harmonisation of Bach’s suite in C major. In his captivating performance, LaFollete sensitively and compellingly articulated the different characters of each piece. Palmer’s accompaniment in the Suite italienne was no less accomplished and she convincingly retained an infectiously enthusiastic and delicate touch even whilst playing percussive phrases, such as some of the brisk figures of the Tarantella.

The second half of the concert opened with Brahms’ Four Serious Songs (Vier ernste Gesänge), a cycle of four songs on biblical texts originally composed for bass and piano shortly before the composer’s death. Transcribed for cello, the solo line was taken by LaFollette. The cellist achieved a true cantabile sound which successfully emulated the phrasing, profundity and emotional clarity of the human voice. The despair, resignation and hope expressed in the four songs was complemented by Grieg’s cello sonata in A minor. Charged with a similar frustrated anger and pensiveness, the Norwegian composer’s virtuosic writing not only requires complete technical fluency and intimate understanding of musical emotion from the cellist, but also from the pianist. Palmer glided over the technical issues of the piece with such ease and professionalism and interpreted the musical lines with such perceptiveness that the primarily accompanying piano part of the previous two pieces with piano and cello instrumentation rose to the equal and fantastic grandeur of the cello part.

In what was an absorbing and enlightening concert, LaFollette and Palmer presented their musical offering with great aplomb and sheer brilliance. This was an evening of pure pleasure.
Timon Staehler, Music Scholar,
St Edmund's School Canterbury
​December, 2017

Often it is argued that London (e.g. Wigmore, Kings Place) is the only place to hear world class performance of chamber music. This idea was entirely contradicted when the Whitstable Music Society opened this years concert series with a recital given by the stellar Sacconi String Quartet together with one of the great English pianists Charles Owen.

A full to capacity audience were enthralled by the programme from the outset, quite appropriately attracted by the prospect of one of Haydn's greatest quartets, 'The Emperor', one of the most sublime piano quintets in the repertoire by Dvorak, and the shock of the new in the piano quintet of English composer Johnathon Dove. They were not to be disappointed having been treated to ravishing playing by the Sacconis and the muscular pianism of Charles Owen.

Virtuosity was in abundance throughout. Haydn, taxing the players in this highly developed and sophisticated genre, calling for extremes of dynamic, precise passage work and sonorous melody whilst Dove demanded complex rhythmic passages to be played with energy and panache. The dialogue between the quartet  players and with the pianist  was both uncanny and exciting, each enjoying the others interplay, communicating effectively with each other and audience alike.

A rapturous reception at the conclusion of the Dove (the new kid on the block) was matched by the applause following the sensuously romantic Dvorak quintet. The music was sublime, so too the playing of the Sacconi Quartet and Charles Owen. A world class start to a season of concerts in the seaside town of Whitstable.
Musicus
October 2 2017
A short selection of reviews from earlier years

Reviews Of The Current Season

What The Artists Have To Say

Send Us Your Review